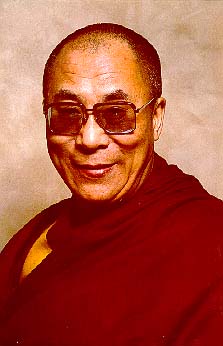 His Holiness the Dalai Lama of Tibet

His Holiness the 14th Dalai Lama of Tibet

Since 1959 when the Communist Chinese invaded Tibet, forcing the Dalai Lama into exile, he has emerged as an international statesman for peace. His consistent refusal to adopt the use of violence in Tibet's struggle for freedom won him the Nobel Peace Prize in 1989 and the respect of the world community. The Dalai Lama is a Buddhist monk, scholar and the temporal and religious leader of the Tibetan people. He is recognized internationally as a champion of human rights, as an environmentalist, and as an advocate of compassion and personal responsibility.

Inspired by visits of the Dalai Lama to New Zealand, this website was created and has been maintained as a source of information about this wonderful person.

When he visited New Zealand for the first time in 1992, he inspired thousands of people by his steadfast grace and compassion. His words were an uplifting message proclaiming global harmony through individual action. His serene presence was a living testimony of peace even in the face of his exile and the agony of Tibet and its people under 44 years of ruthless domination by the communist Chinese government.

He again visited New Zealand in September 1996. The visit was a wonderful success with over 30,000 people coming to five public talks in the main centres. The visit was organised by "The Trust for the Visit of His Holiness the Dalai Lama to New Zealand," a charitable trust set up to create the opportunity for New Zealanders to see and hear him. His Holiness left New Zealand for a two week visit to Australia. From 20th to 29th September in Sydney, he gave the special Buddhist teaching called the Kalachakra Initiation for the first time in the southern hemisphere.

To read all pages on this site follow the

The material on these pages has been prepared from the official brochures, newsletters and press kit of the Trust for the Visit of HH the Dalai Lama to New Zealand, with additional material compiled by Ven. Sönam Chökyi, a Trust publicity officer, as well as other sources... Thanks to Clive Arrowsmith, Snow Lion Publications and Wisdom Publications for use of photos of H.H. the Dalai Lama.