His Holiness the 14th Dalai Lama of Tibet 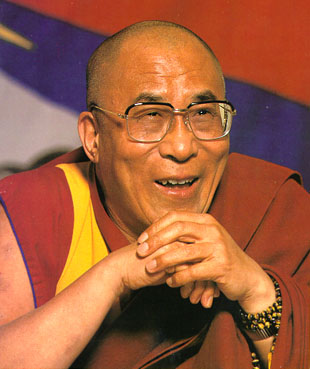 The Dalai Lama, religious and temporal leader of Tibet, is recognised internationally as a spiritual leader, peace leader and statesman.

His refusal to use violence in Tibet's struggle for freedom won him the Nobel Peace Prize in 1989 and the respect of the world community. He has been invited to New Zealand to share his message of peace.

The Dalai Lama has lived in exile in India since 1959, when he fled Tibet after the failed uprising against the Chinese invasion. Since that time he has devoted himself to the plight of his people and to promoting world peace, winning the respect and affection of world leaders and millions of people throughout the world. His policy of non-violence offers a solution to the most difficult political, environmental and personal problems of our time.

On awarding him the Nobel prize in 1989, the Nobel Committee said:

"The Committee wants to emphasise the fact that the Dalai Lama in his struggle for the liberation of Tibet consistently has opposed the use of violence. He has instead advocated peaceful solutions based upon tolerance and mutual respect in order to preserve the historical and cultural heritage of his people.

"The Dalai Lama has developed his philosophy of peace from a great reverence for all things living and upon the concept of universal responsibility embracing all mankind as well as nature."

The Dalai Lama has devoted himself to the cause of the six million Tibetans still living in Tibet under Chinese occupation. In India he has established a democratic government-in-exile and set up a variety of schools and institutions to preserve the culture and religion of Tibet and to care for the 100,000 Tibetans who followed him across the Himalayas into exile.*

In recent years the Dalai Lama has travelled extensively, sharing his philosophy of peace based on compassion and personal responsibility. He has spoken out against the nuclear arms race, the destruction of the environment and suppression of political freedom and human rights.

The Dalai Lama, a Buddhist monk and scholar, is also well-known in the West for his keen interest in other faiths and in science, particularly nuclear physics, neurobiology, and ecology.

The material on these pages has been prepared from the press kit on His Holiness the Dalai Lama of the Visit Trust to NZ 1996, with additional material compiled by Ven. Sönam Chökyi, and was prepared for the web by Sönam Tenzin.
E-MAIL: All enquiries, comments and suggestions welcome.